skip to main | skip to sidebar

This blog is aimed at tracing the world news related to nuclear power development internationally and in particular countries. Being an independent resource, we accept all kinds of opinions, positions and comments, and welcome you to discuss the posts and tell us what you think.

Who are the Swedish antinukes?

I had this event in my calender for 2 weeks ago already. The film "I have Cesium in my blood" ("Jag har cesium i blodet") by Swedish journalist and documentalist living in Brasil, Lars Westman. After the film, a discussion on nuclear waste permanent storage was announced, with my colleagues at Örebro university participating at the panel. Announcement below. 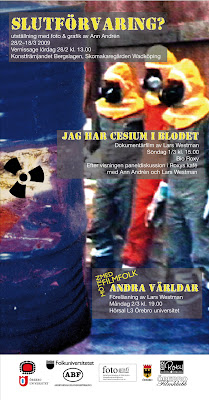 The film itself was impressive - just as the picture on the announcement. It was about a case that took place in Brasilian town Goiania in 1987 where a radioactive container from an old hospital was occasionally thrown away and found by local people who desided to dismantle it and sell as valuable metals. The case is described here.

For sure, there were a lot of personal stories, broken human lives and awful pictures of people damaged by radiation.
And after 1 hour of watching this, all the spectators were invited to the cellar of the cinema hall, where they arranged a discussion with the producer of the film Lars Westman and a few other people (among them my colleague Mats Eriksson who did a research on media images of nuclear power, and Andreas Oberstedt who teaches a course in nuclear physics at our university).

Just from the very beginning I noticed a few people in the hall who had a yellow mark on their coats... Like this (Says "Atomic power? No, thanks!):

By the time the discussion was about to start, I found myself in a room full of antinukes. It looked like they all knew each other, were very well organized, distributed leaflets and some environmental newspapers.
In some of my previous notes I was wandering why is this country so openly antinuclear when it comes to public opinion. There should be people around who write these poorly argumented articles against the development of nuclear technology, pointing back at Chernobyl and extreme cases like Brazilian one.
Now, here they are. 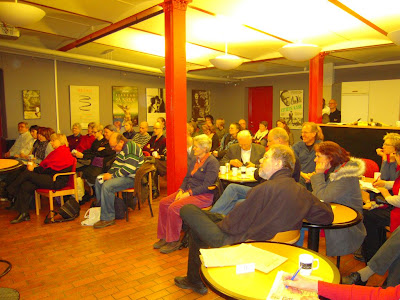 Not to offend anyone, but I felt like watching a POLITBURO session of Brezhnev times. Average age of the audience was around 50-60, some were much older. There were a couple of young faces (students, I suppose), and some middle age people who did not seem to be very active.

So, what did we discuss then? First, the panel spoke, and Anders Oberstedt said a key thing in the debate. He said: "All your fears come from your ignorance", meaning people who are openly against nuclear power, do not have enough information about it. An, inspite of him giving a reasonable explanation of his pro-nuclear position, showing factual information in form of graphs and figures on climate change... this audience started throwing questions and comments against him.
"Aren't you oversimplifying the reality with showing just this CO2 emission graph?" - cried an agressive guy who could well be my grandpas father. The rest applaused.
"How can I be informed and not ignorant if the papers do not publish much on this?" - said one lady. (When I commented back to her that there is enough info on the web, in case she is interested, she replied she was not a computer user).
The debate that was supposed to be about the film landed into a pro and antinuke antagonism. To the honour of Mr. Oberstedt, he could well defend his position, with reasonable argumentation. I am not sure if any of the people in the hall went away persuaded (such people as a rule are not that flexible), but status quo remained.
I agree that these people are not informed and educated well enough to see the scale of the energy challenge that their country faces. And I am not surprized that Swedish government does not have an open debate on issues like removing the ban for new reactor construction in Sweden. After years of antinuclear propaganda, it's not that easy to persuade the people who get all the information from TV and papers, and are not even willing to study and think themselves. They are too much used to the fact that someone thinks for them.
Anyway. There was no fighting this evening at the cinema cellar, the discussion was very fruitful from the point that various opinions met. As one young guy said correctly, this debate has to move from the small room to the place where many more can participate - to internet fora.
Posted by Alexandra Prokopenko at 9:54 PM

Good for you to go and participate. One problem I think is working people in industry have assumed things would all work out and not participated in their civic society.

So these types of groups with radical ideas of one type or another, and time to go to all the public events, dominate the debates. And that helps shape the negative image of whatever it is. Media reports on the public concerns(the radicals who show up), with very few journalists being like you and actually researching the subject in depth.


I'd also agree with your point about the government doign things in secret. I've noticed what the government where I live is doing is simply not even mentioning things in public and the media are playing along by not covering things at all. So I ask friends oh did you hear about such and such a big project happening in our province? And no one has even heard of it. If people don't know about it they can't protest it.

Yep, actually, this group was even open enough to invite the managing director of EON, but he could not come unfortunately (and the organizers were really upset by this). In Sweden, in general, people are used to trust their authorities, and they do truly believe that things WILL BE discussed in public before decisions are made. It used to be like that, but it is not like that anymore. On contrast to former USSR where we know for sure one cannot trust anyone, we are at least curious enough to dig for info ourselves wherever we can. Swedes, on contrary, expect that they will be told everything on TV.

The risks from nuclear industrial activities, which are far severe than the Greenhouse effects, are deliberately hidden to the public and politicians all around the world. The reason is obscure, since the scientists are well aware of the deadly effects from radioactive contamination and emission. The naked truth is that sofar, no one in the world has found a safe method to handle the nuclear wastes. If this method is not found, we will face the end of Life on Earth. Which people can be so deprived of humanity to have an interest in hiding the truth ? We all know that the world is controlled by those that possess the political = economical power. But even so, do they really wish to put an end to Life on Earth, which will be the consequence of producing radioactive waste ? Some true scientists try to inform the public about what's going on but we are strangely silenced as we try to spread scientific true facts by submitting articles in the big newspapers and our contributions are never cited after our presentations at conferences. Which people are responsible for these evil acts ? Which people want to put an end to the Life on our Beloved Earth ?

Hello Johan. What is sad about your post is that in your case, I get the sense that you genuinely believe what you have posted, and you really are very frightened for the future on account of it. For my part, I believe that you have been lied to by people who put out anti-nuclear propaganda for purposes far other than the ones they declare in public.

Perhaps we can begin to set your mind at ease by introducing some numbers to the discussion. You speak of articles and conferences. If you would like to reference some of these articles, we can have a look at the numbers and reasoning contained in them, and get to the root of it all.

Dear Johan,
I assume from your name you are from Sweden. It is very typical for the modern Swedish society to think the way you do, because you have been objected to a large scale antinuclear propaganda from the government and the media side for more then 20 years. Finrod has a point here, did you ever try to abstract from what you believe to be reality and search for true facts?
Wish you welcome to the real world!
Med vänliga hälsningar,
Alexandra Prokopenko

"Some true scientists try to inform the public about what's going on but we are strangely silenced as we try to spread scientific true facts by submitting articles in the big newspapers and our contributions are never cited after our presentations at conferences. Which people are responsible for these evil acts ? Which people want to put an end to the Life on our Beloved Earth ?"

follow up with another email after a few days
Microsoft Office
often acknowledging that maybe the person
Office 2010
didn't get my message due to email trouble on my
Microsoft Office 2010
end (which, when I was in graduate school, was
Office 2010 key
For repeat offenders, I just use the phone whenever
Office 2010 download
Interesting post. I have been wondering about this issue,so thanks for posting.
Office 2010 Professional
I will be checking back for any new articles
I’ll likely be coming back to your blog. Keep up great writing. Find your great Travel News and sing the songs at Free Song Lyric or you can watch the drama at
Microsoft outlook
Outlook 2010
Thanks for kindly sharing it with us. Very well done indeed
Windows 7
Microsoft outlook 2010

Sometime few educational blogs become very helpful while getting relevant and new information related to your targeted area. As I found this blog and appreciate the information delivered to my database.cursus medium

Sometimes is becomes very hard to take appreciation for your hard work. But sometime only few technical point makes your work worthwhile. Suggestion under this blog is quite good. mediumschap ontwikkelen

Help us to make this blog better!

Other Nuclear Blogs and Links

Our visitors are here